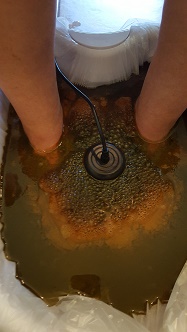 In today’s modern world we are continuously bombarded with harsh chemicals and toxins. Often considered “foreign” to our bodies, our eliminatory organs are working to the point of being stressed, in order to properly take care of these substances. It is becoming more and more common that an individuals personal toxin burden is increasing to the level that their bodies would benefit from additional assistance in the detoxification processes.

Introducing the Ionic Detoxification Foot bath system! This system helps eliminate toxins and provide the body a hand up in this area. It is definitively a positive step in sustaining your good health.

Here is how it works: This system utilizes scientific principles associated with introducing micro currents to facilitate ions, positive and negative, ability to move fluidly in and out of the cells restoring the balance of these charged ions. Using an array in the (foot bath) water, the water is ionized causing it to split into positive (acidic) and negative(alkaline) ions. These ions enter through the pores of your feet, traveling throughout the body, neutralizing oppositely charged toxins in the cells, supporting their passage to exit the body. Thru this modality, the body’s organs can become stimulated and energized to optimal function. This then allows the body to use its normal processes, such as sweating, urination, defecation, to eliminate metabolic waste and stored toxic burdens.

While a clients feet are in the water being ionized, they are often amazed at the color changes of the water they observe during their sessions. The water is effected by: * oils that are being released by the glands * as a result of their personal acidity/alkalinity * from dead cell debris. Various colors are suggestive that a person may have accumulated toxins in specific areas that the ionic detox is helping in.